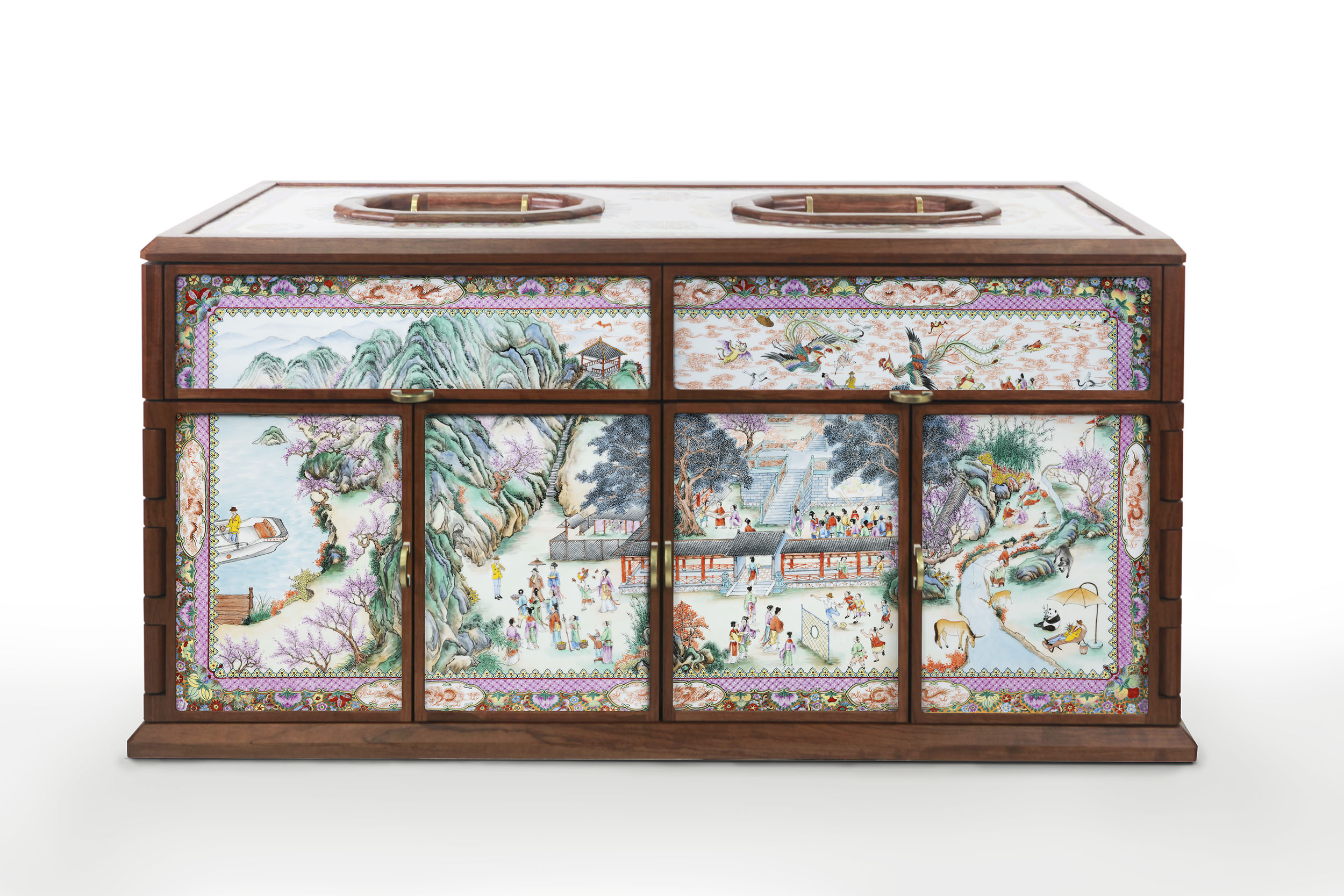 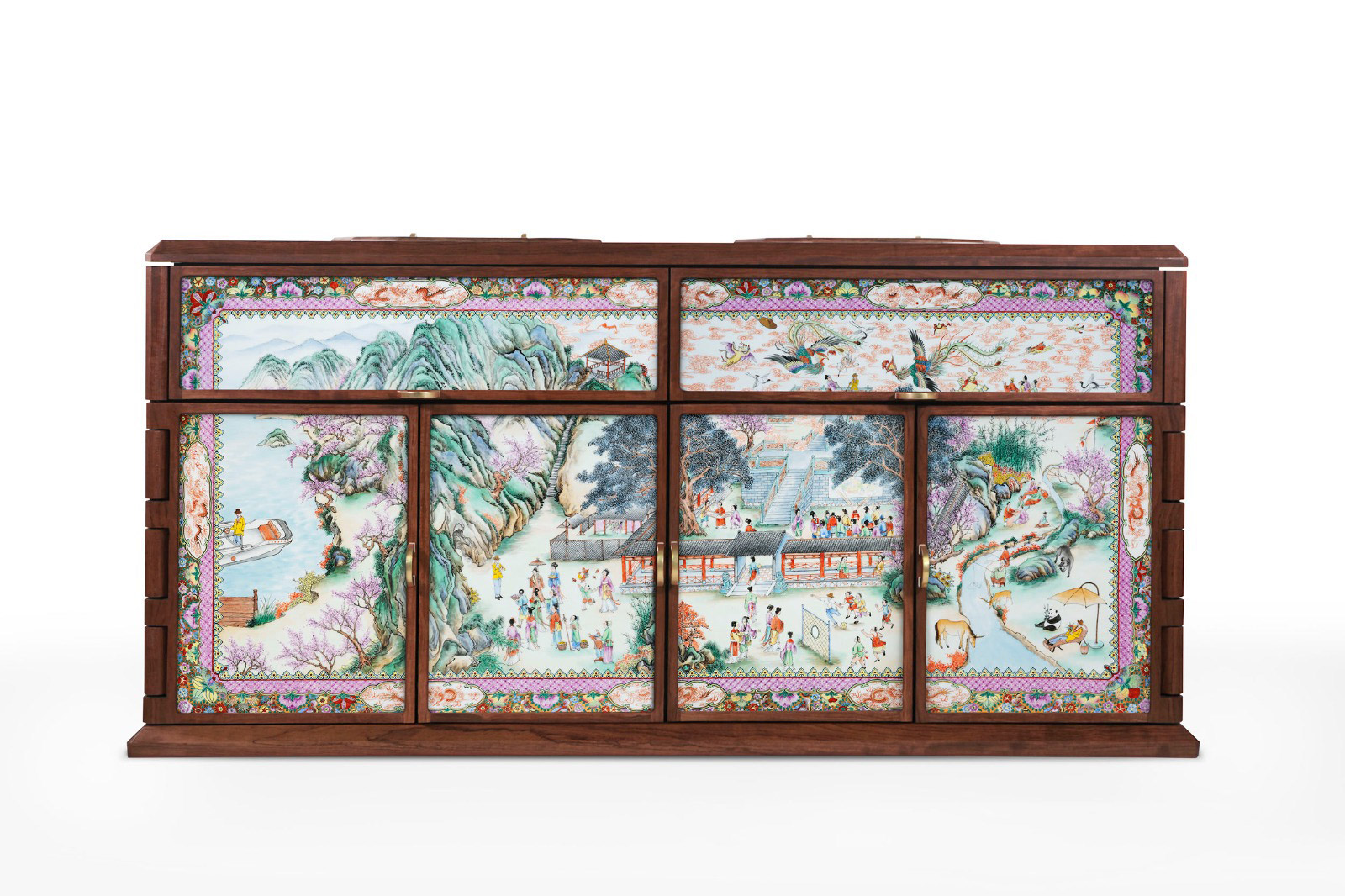 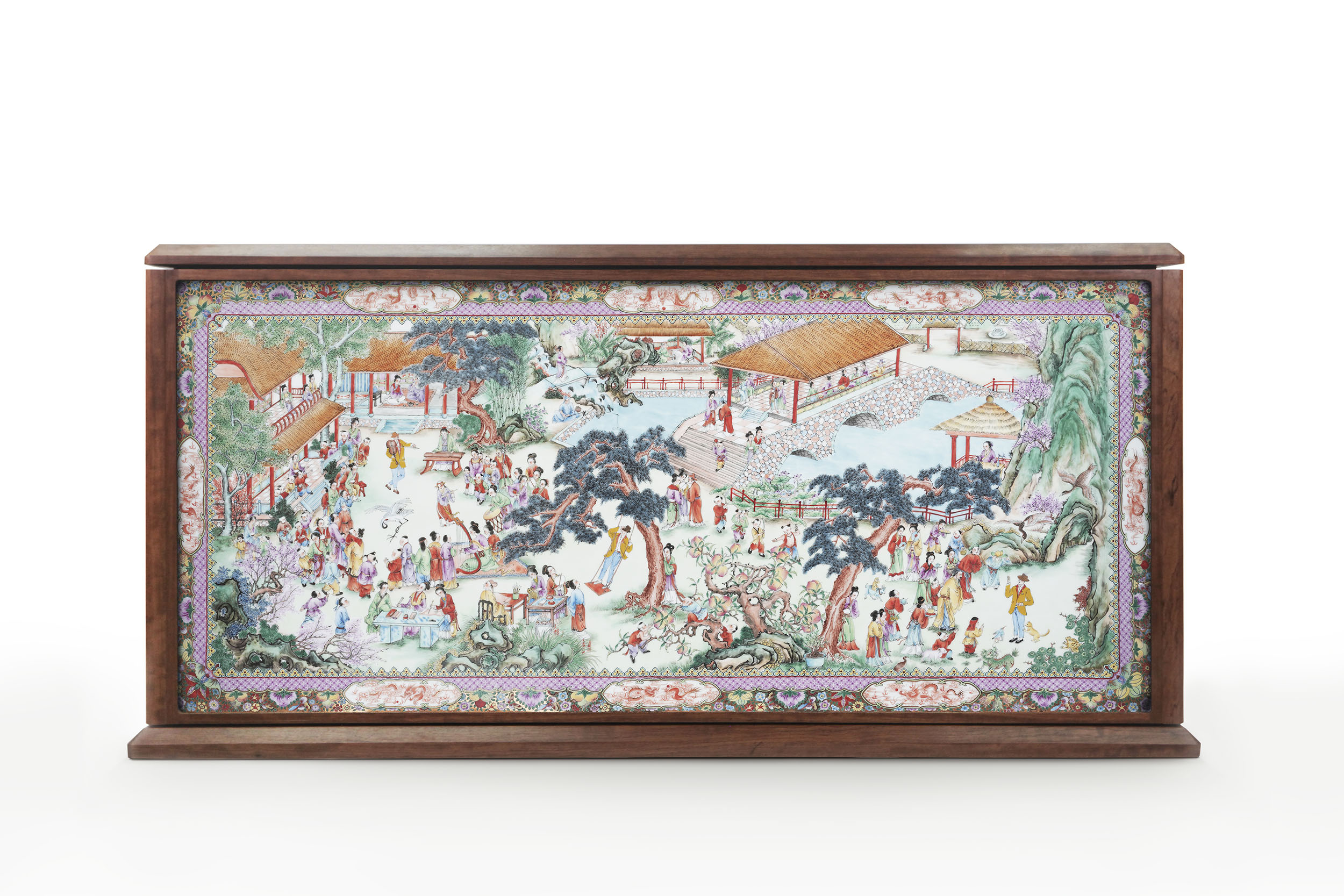 This stand-alone jewellery box is designed to be simple: There are two rotating containers behind the doors in the middle, two drawers above them, and lastly, two more shallow containers on top for the users to pick up their accessories easily. It is finished with wood joinery techniques that were used in traditional Chinese craftsmanship. Emphasis is given to the five Canton porcelain boards on the box. We worked closely with K11 Craft & Guilt Foundation for this project. We were responsible for outlining the story, designing the characters, and drawing the scenes. On the other hand, we invited Canton porcelain master Master Tan GuangHui, a national-level inheritor of this artistry to add on some signature graphics of Canton porcelain on the boards. All the graphics were hand-drawn by Master Tan and his team, the boards then underwent a total of three times high-temperature burning to get finished. 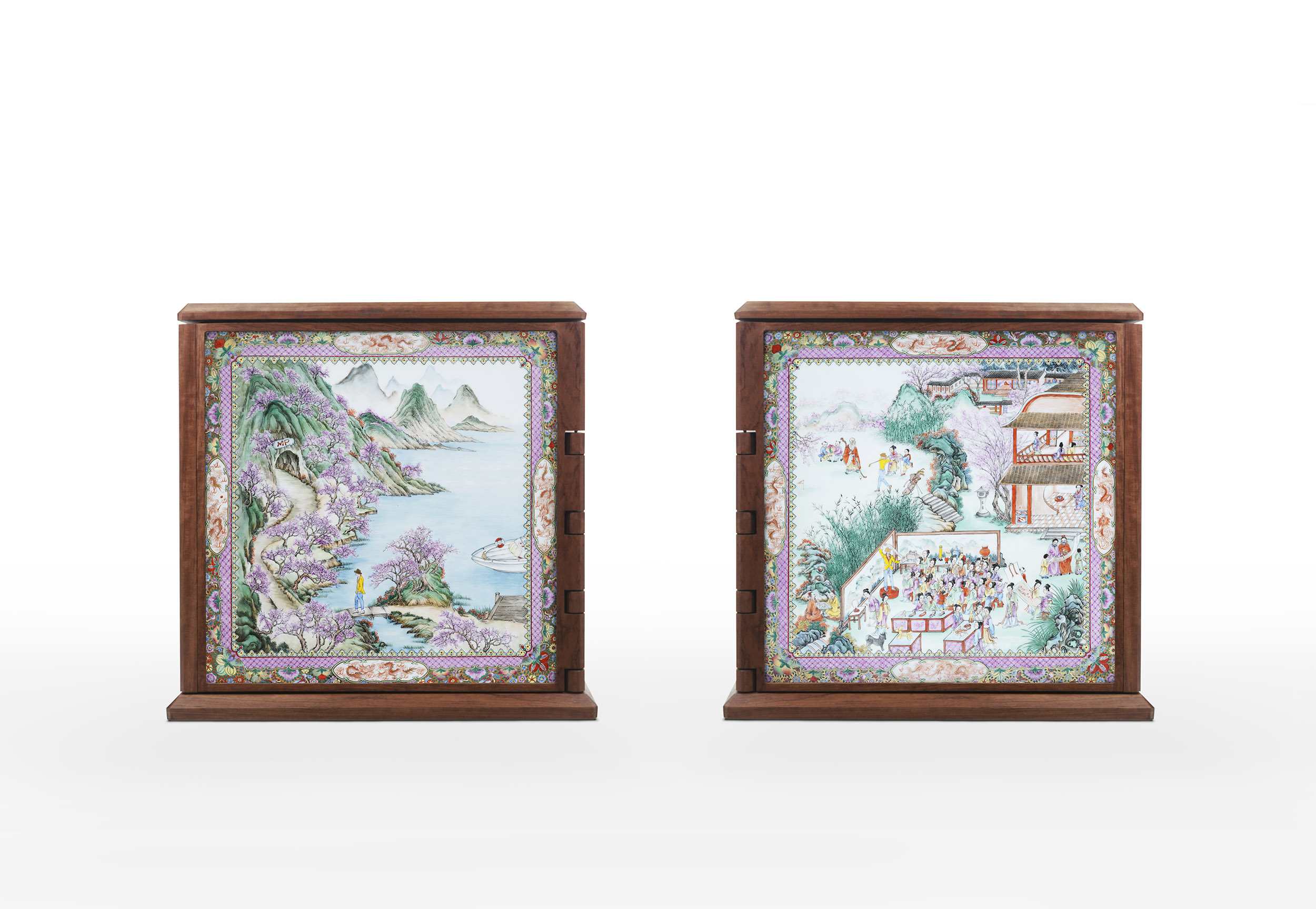 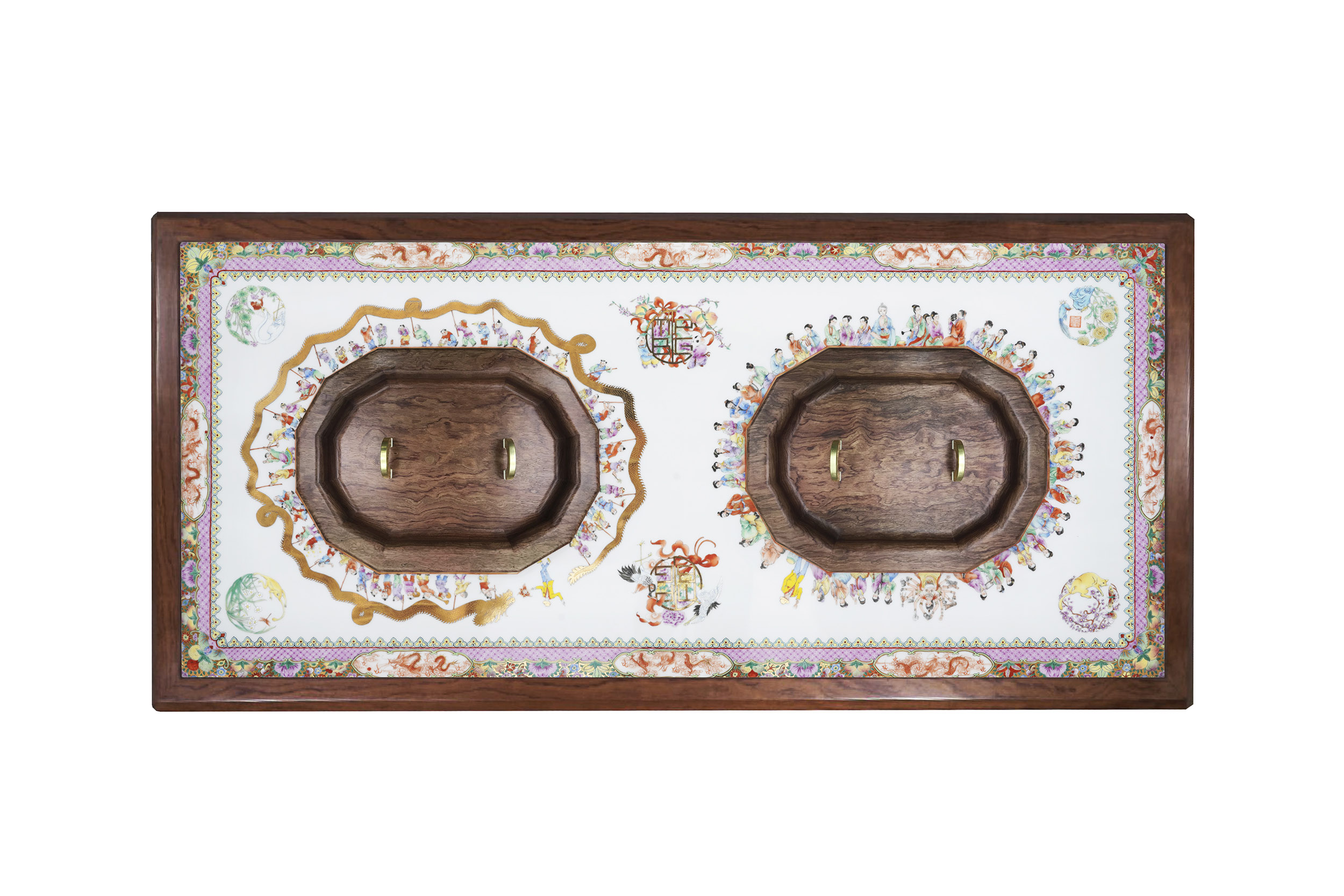 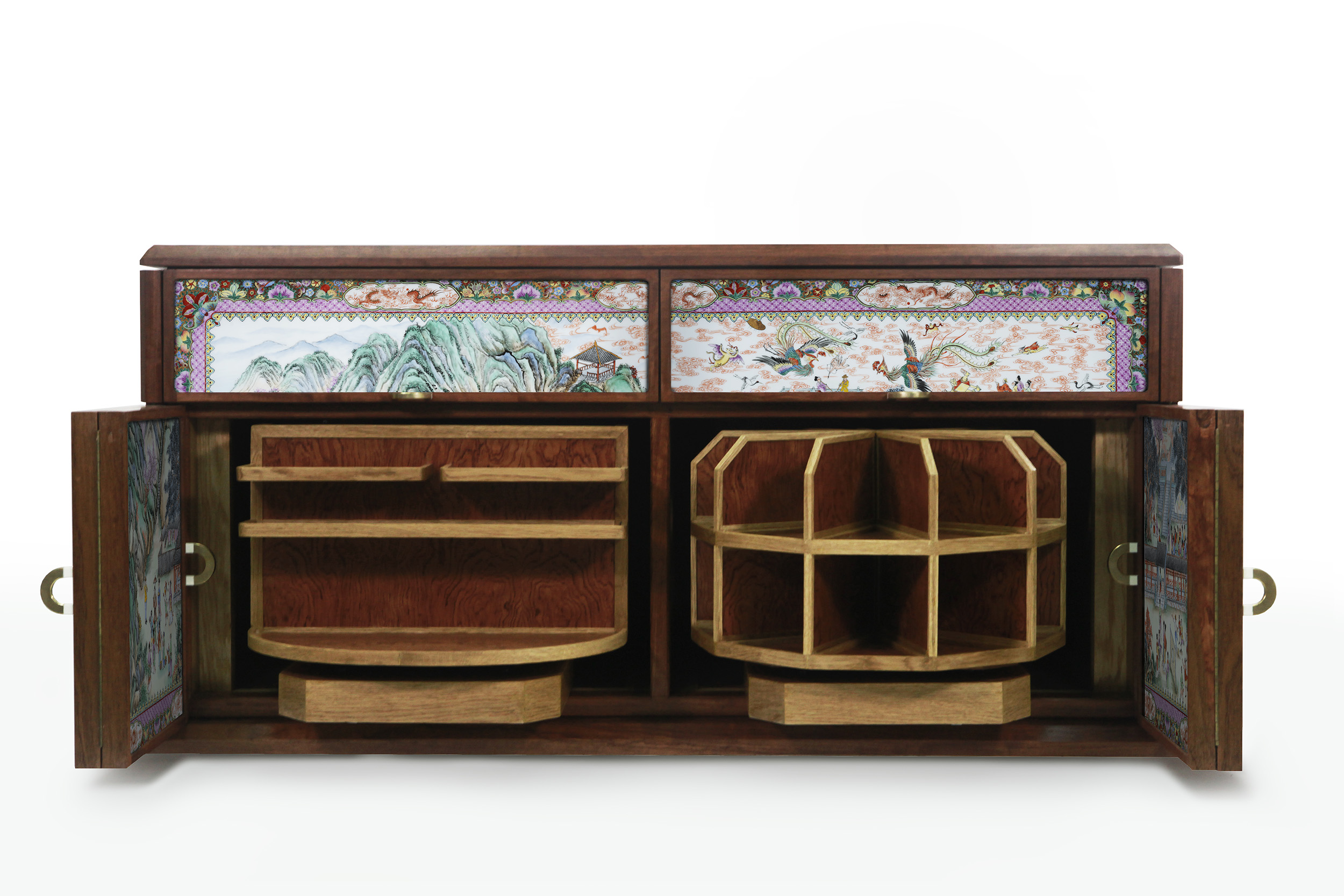 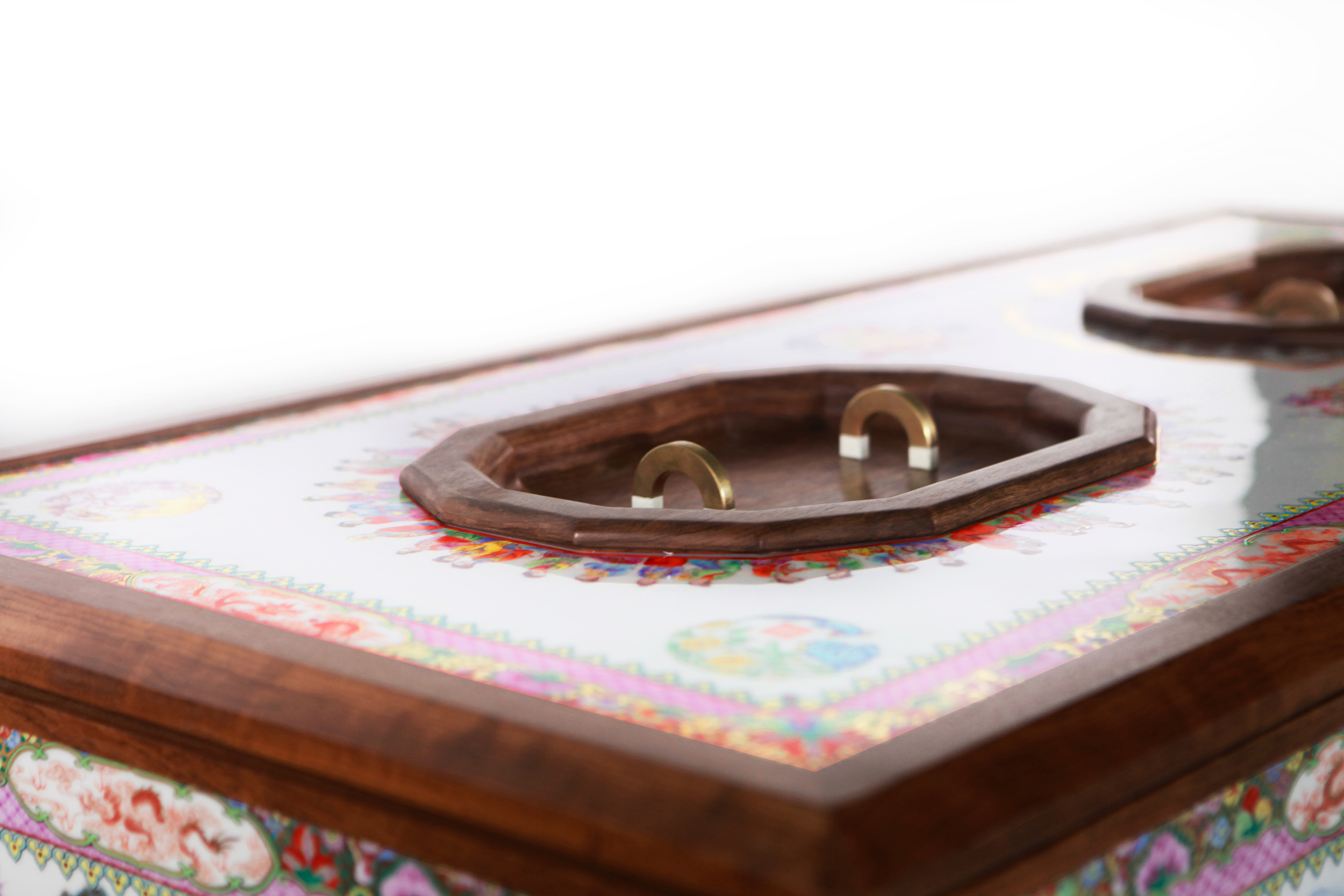 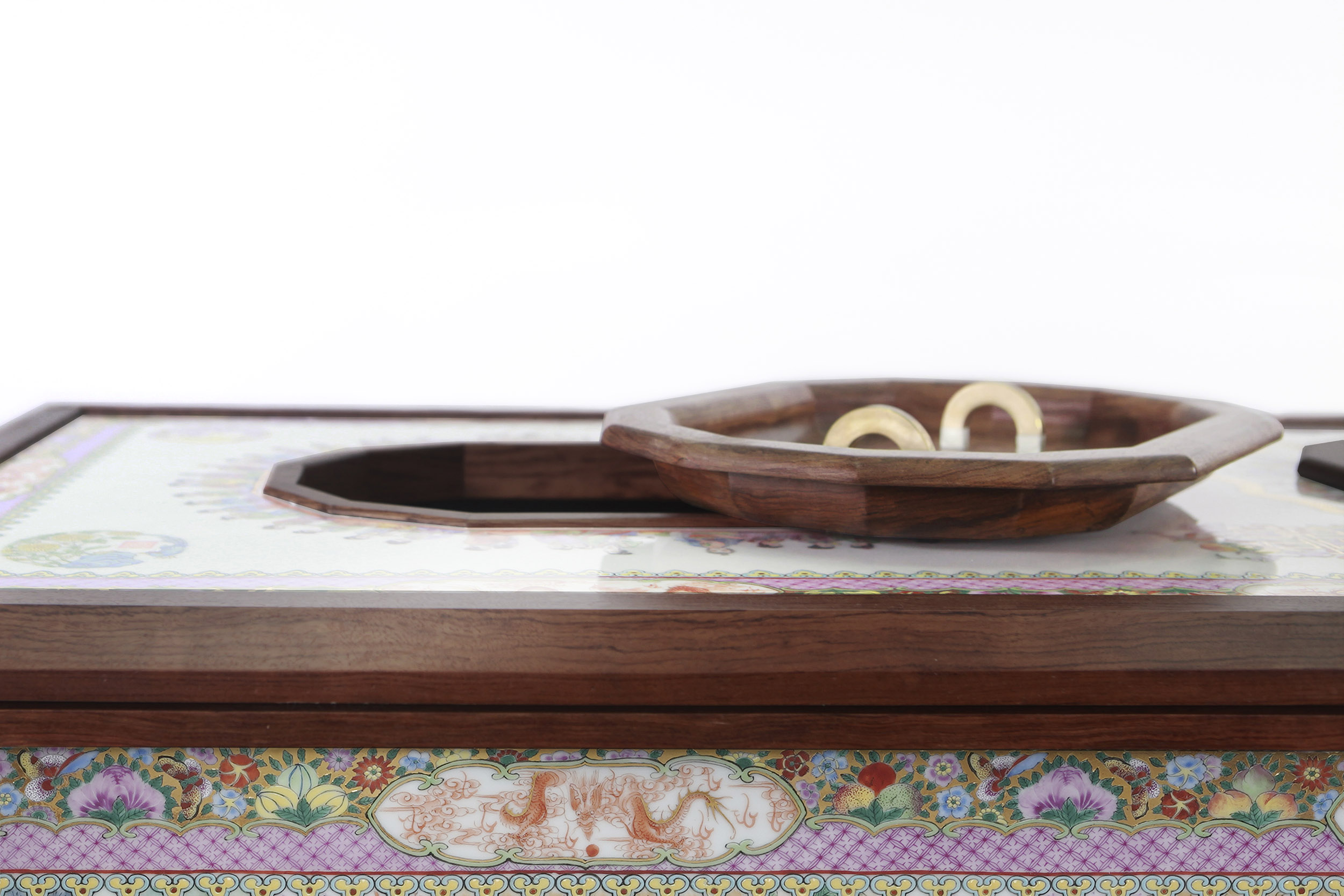 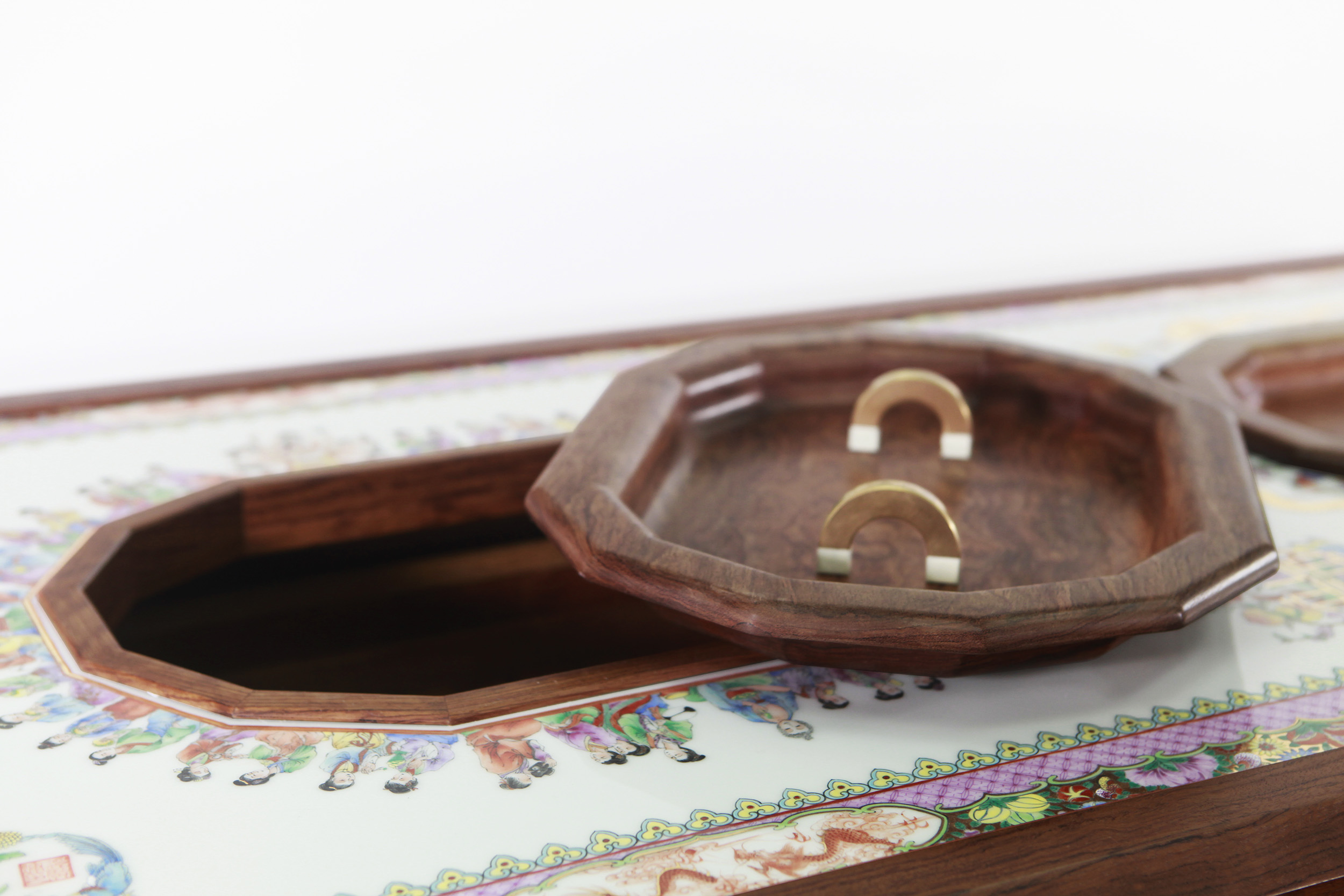 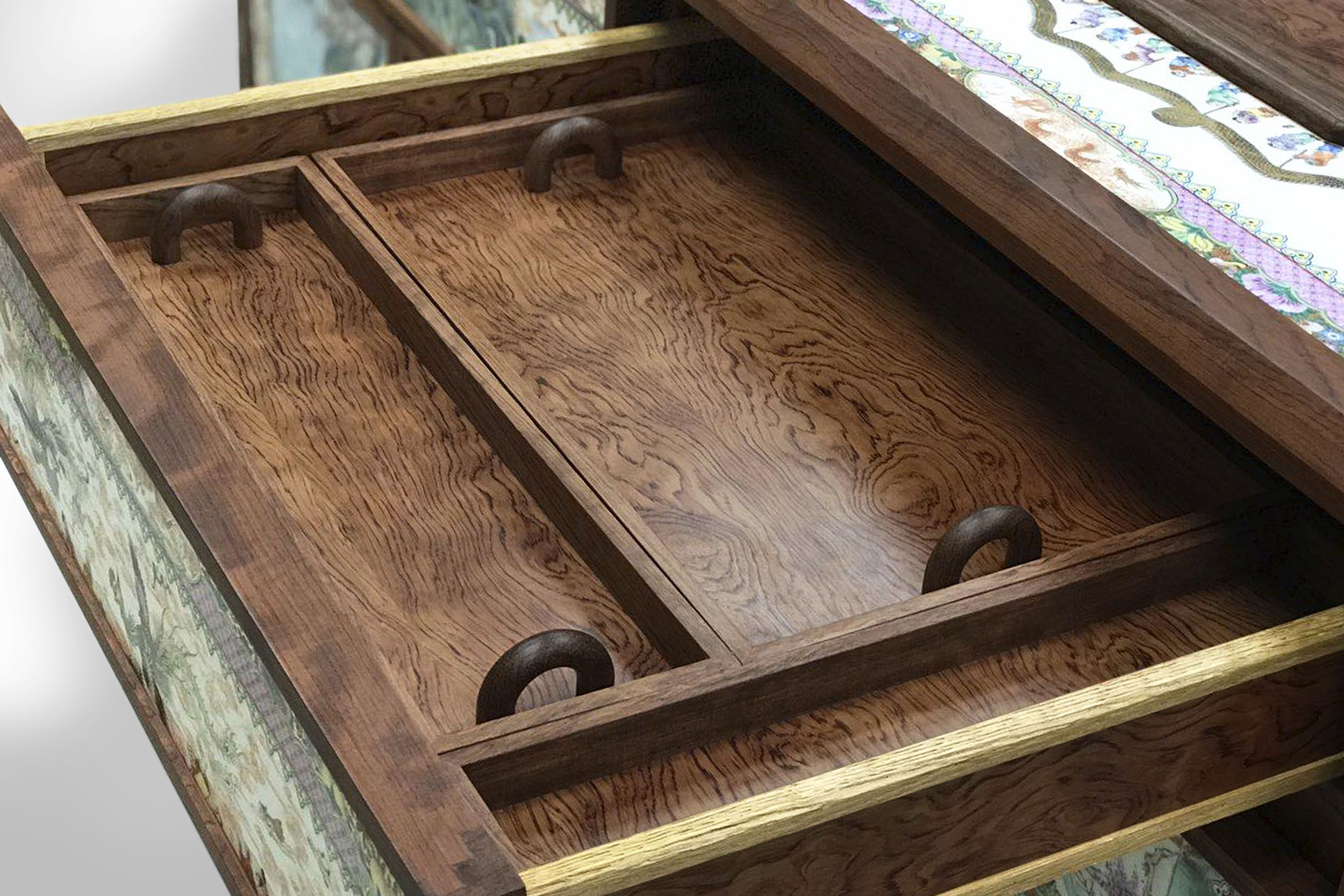 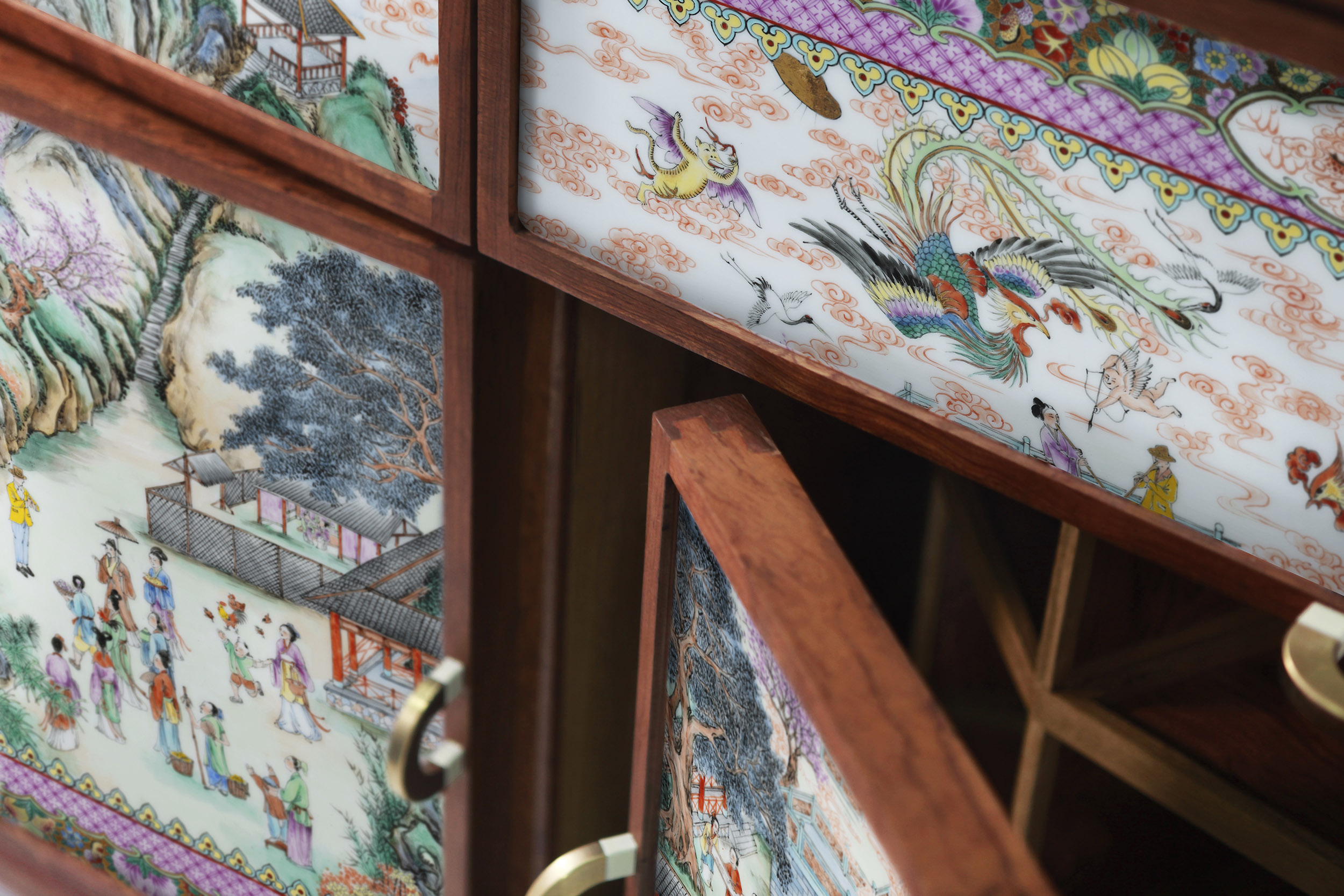 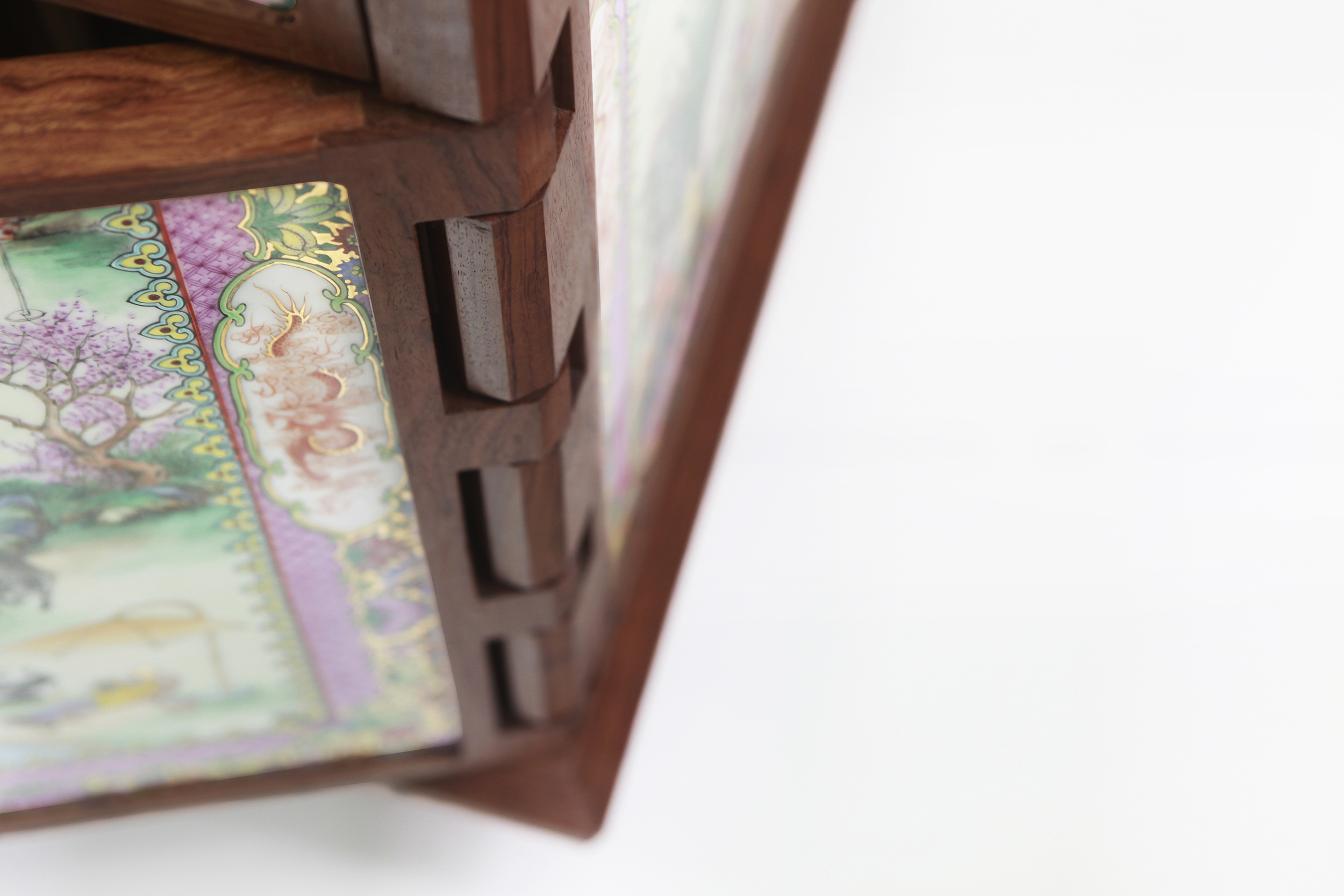 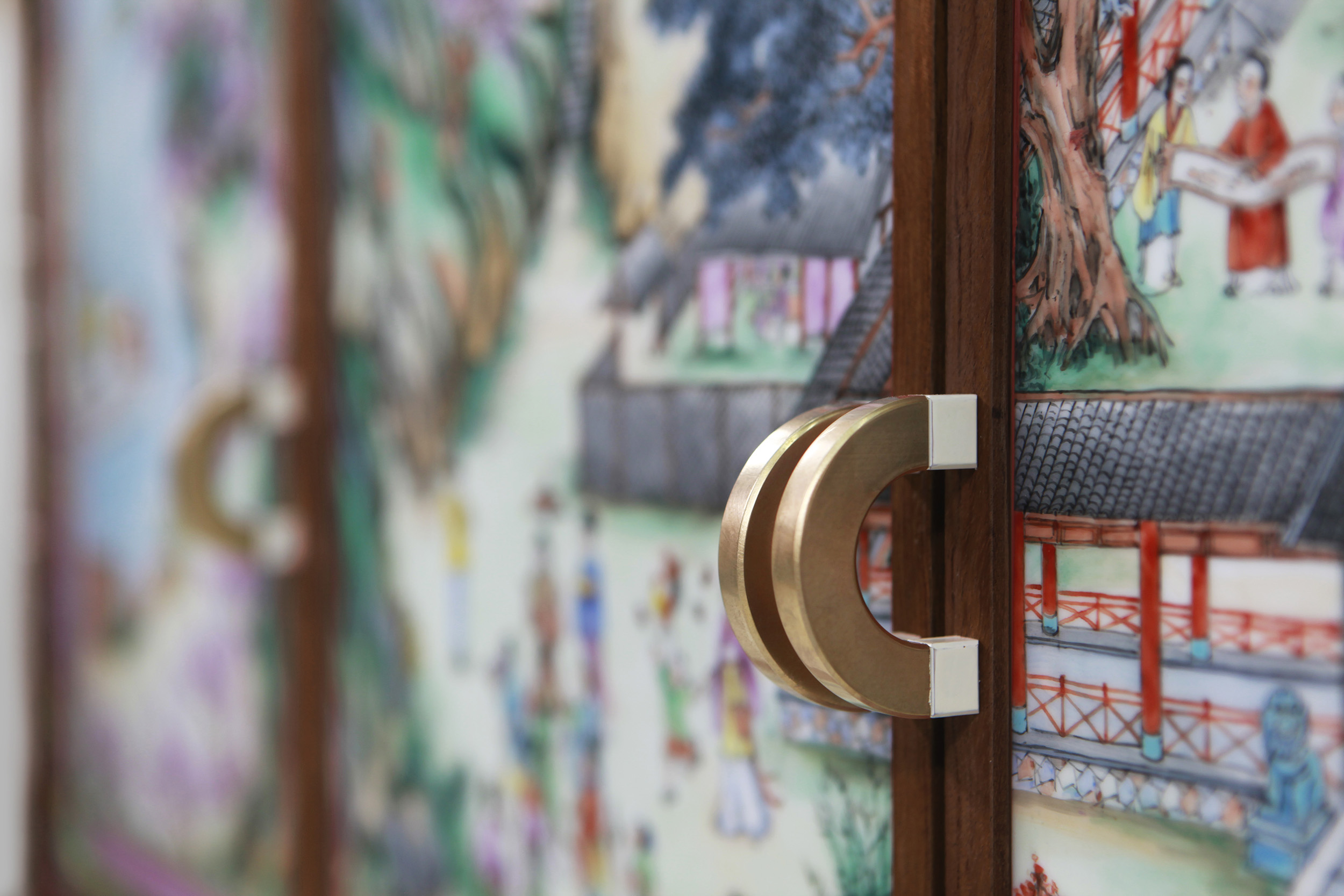 Canton porcelain, a national Intangible Cultural Heritage of China, is known for its vibrant colours, rigorous composition, and attention to detail. For instance, Canton porcelain merges Western oil painting techniques with its foundation of Chinese painting. Moreover, Western religious stories have also been featured in the Canton porcelain artefacts. To us, the most precious trait of Canton porcelain is its openness in adopting elements of different cultures in its painting compared to other traditional Chinese crafts.

We wish to bring arts back to daily life, thus our project is an attempt to design a piece of everyday furniture that could retain traditional aesthetics as well as fulfil modern furniture functions. To achieve this, we decided to select a highly-detailed story that could express the characteristics of Canton porcelain to be drawn on the boards. The story is redeveloped based on a traditional Chinese story, “the Peach Blossom Spring”, about a man accidentally arriving at an uncharted wonderland where the indigenous have been staying there without any communication with the outside world after war broke out in their ancestors’ homeland in ancient times. We changed the main character into a modern man and visualized the experience of him traversing into the wonderland. This decision was inspired by the living place of the owner of this jewellery box. The owner lives in a place unlike typical Hong Kong, distanced from the hustle and bustle urban lifestyle, which reminds us of the wonderland in this story. 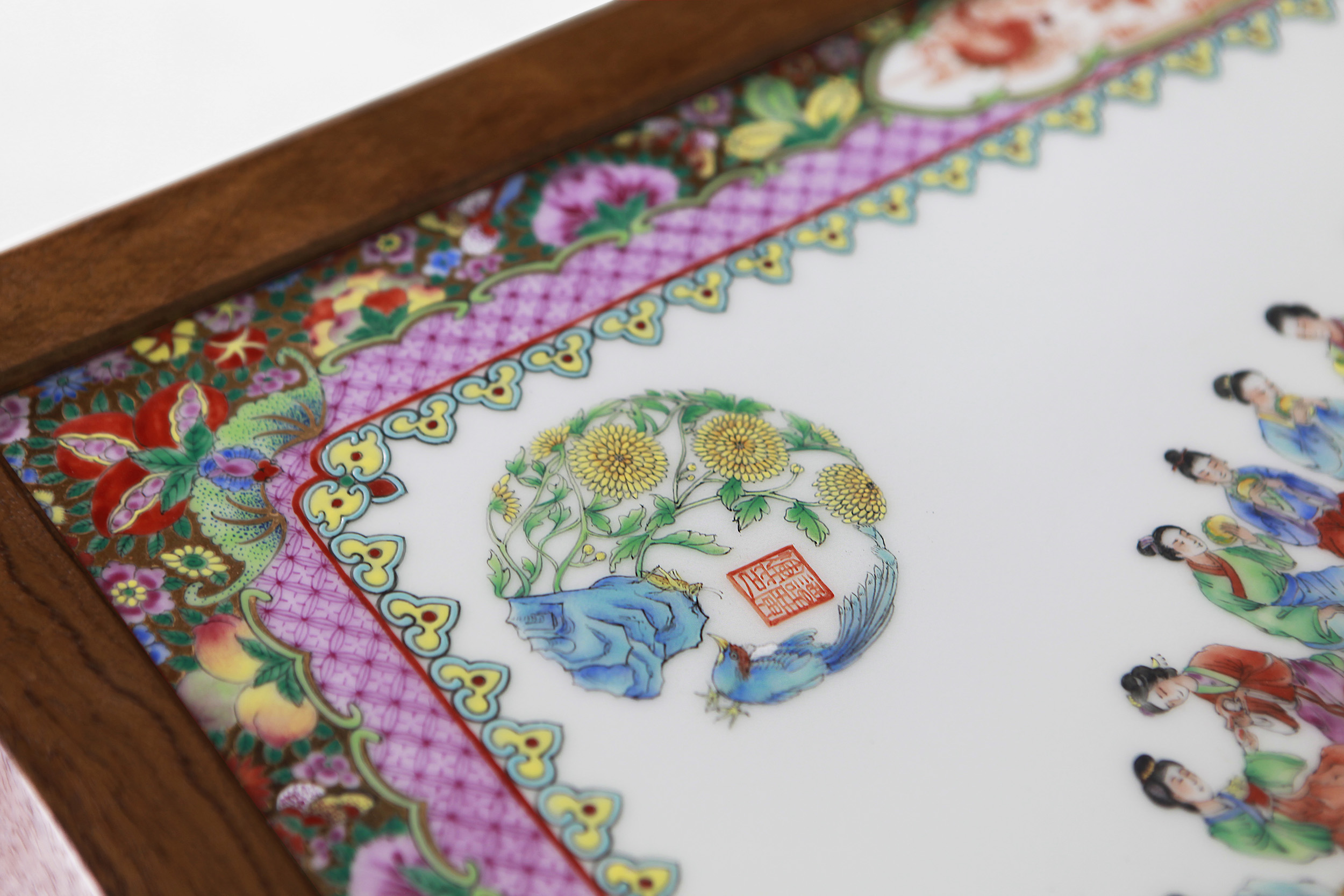 The story is arranged in a three-dimensional comic strip manner, on which each section presents a new surprise: The story starts at one side of the jewellery box, where the modern man got off from the speedboat and entered the wonderland through a cave. He was welcomed by the indigenous and auspicious animals. He also shared a lot of modern entertainments with the indigenous and enjoyed his time at wonderland. On the last side, after being farewelled by the indigenous, the modern man got on his speedboat again to return to the present world.